Activities of the Ashrama along the lines laid down by Swami Vivekananda – "Atmano Mokshartham Jagadhitaya cha" or "for the liberation of self & welfare of the world."

The Swami Vivekananda Memorial will be dedicated in the first week of February 2019.

An amount of Rs. 1 crore is required for the pending restoration works of the house and setting up of the exhibition-museum at the Swami Vivekananda Memorial.

We appeal to you to donate generously to this noble cause and also encourage your friends and family to do the same.

(After the bank transfer please send an email with your name and postal address to belgaum@rkmm.org and inform us about your donation)

During his parivrajaka days, Swami Vivekananda visited Belagavi from 16 to 27 October 1892. Swamiji’s 12-day stay in Belagavi revolved around two buildings where he stayed as a guest—Bhate’s house and Haripada Mitra’s house. His first 3 days at Belagavi (16 to 18) were spent as a guest of a lawyer of the city, Shri Sadashiv Balakrishnapant Bhate (Bhausaheb).
Reminiscences of the visit of Swamiji to Bhate’s house have been noted down by Prof. Ganesh S. Bhate, the son of Shri Sadashiv Bhate, who at that time was a small boy. These can be read in Reminiscences of Swami Vivekananda published by Advaita Ashrama, Kolkata.
This house, popularly referred to as the Bhate’s House, was sold in the early 20th century to Shri Dattopant V. Belvi, another famous lawyer of the city. 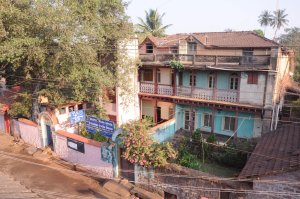 In 1987 his son, Shri Balwant D. Belvi, a retired judicial magistrate, gifted one third of the house including the room where Swami Vivekananda had stayed to an independent group of devotees of Ramakrishna Movement based in Karwar in Karnataka. In 2006, this was transferred to the Ramakrishna Mission, which started a sub-centre there. The room where Swami Vivekananda stayed has been maintained as a shrine. A cot, a large mirror and a walking stick used by Swamiji have been preserved there.

In 2014, the remaining portion of the house was purchased from its owner (the grandson of Shri Dattopant Belvi), thus making the Ramakrishna Mission the owner of the entire house.

As the Bhate’s House was partitioned among the descendants of its original owners, numerous partition walls and additional structures were raised both inside and outside the house for the convenience of the occupants. Over the years, due to indifferent maintenance, the structure developed cracks and weaknesses in different areas. Also due to a fire in May 2013, a portion of the top floor was burnt and required urgent repair.

It was felt that urgent restoration was required, to (i) strengthen and prevent further deterioration of the structure & (ii) to remove additional structures and restore the house to its original form when Swami Vivekananda stayed there.

After the Mission took possession of the entire house towards the end of October 2014, the restoration work was initiated. The restoration ensured that original material was retained and wherever necessary indigenous material and methods were used to strengthen the structure.

Proposed future developments will include purchase of a vacant plot of land right next to the main house (which will provide much needed space around the house) and construction of buildings for carrying out educational, welfare & cultural activities of the Mission on a piece of land behind the main house, donated to Ramakrishna Mission by the Government of Karnataka.

Swamiji had great hopes in the youth. While the Swami Vivekananda Memorial and its subsequent activities have the entire society in mind, a special focus will be the holistic development of the youth. Instilling noble ideas and aspirations into the youth and addressing their problems will greatly help resolve the root cause of a variety of issues that plague today’s society.

This entry was posted on January 28, 2016 by rkma in Activities & Projects and tagged Bhate's House, Sub Centre.